I originally wrote this story for Last Exit: Travels with Death in the Garden State, a special issue of Weird NJ that was published in 2009 and has long since been out of print. Seeing a reference to safety coffins on social media the other day prompted me to dust it off and share it here.  (PS: If you came for the beer connection, it’s toward the end.)

In Edgar Allan Poe’s 1844 story, “The Premature Burial,” an unnamed narrator obsesses over various cases of premature burial and then reveals that he suffers from a condition called catalepsy, in which he’d go off into a death-like trance, sometimes for days or weeks at a time. Terrified that like these other not-so-dead-people, he’ll wake up on the wrong side of the coffin one day, he writes that burial before death is “terribly well adapted to inspire the supremeness of bodily and of mental distress.”

He describes what it must be like as thus:

The unendurable oppression of the lungs — the stifling fumes from the damp earth — the clinging to the death garments — the rigid embrace of the narrow house — the blackness of the absolute Night — the silence like a sea that overwhelms — the unseen but palpable presence of the Conqueror Worm — these things, with the thoughts of the air and grass above, with memory of dear friends who would fly to save us if but informed of our fate, and with consciousness that of this fate they can never be informed — that our hopeless portion is that of the really dead — these considerations, I say, carry into the heart, which still palpitates, a degree of appalling and intolerable horror from which the most daring imagination must recoil.

Yikes! In the story, he’ll go through a much effort to make sure this doesn’t happen to him. Read it to find out how it ends.

The narrator’s fear wasn’t completely out of line, however. Before procedures like embalming and cremation essentially ensured you were definitely deceased, sometimes it wasn’t that easy for people to call it for the Grim Reaper.

In Mary Roach’s book, Stiff: The Curious Lives of Human Cadavers, she explains that before brain death became the standard by which we determined the death of somebody, “the stopping of the heart had been long considered the defining moment” of death. The problem? Physicians couldn’t always be one hundred percent sure a person’s heart had ceased pumping. Stethoscopes, Roach points out, were not invented before the mid-1800s, and the early ones weren’t good at detecting weak pulses or heartbeats, so if you were still alive, you still had a good chance of being written off early. Other methods were employed, and Roach writes of some of the ones detailed in yet another book by Jan Bondeson called Buried Alive, which include such horrors as nipple pinchers, tobacco enemas, boiling wax, and shrieking bugle fanfares. Enough to want to die, perhaps.

Katherine Ramsland, in Cemetery Stories: Haunted Graveyards, Embalming Secrets, and the Life of a Corpse After Death, mentions other methods of double checking: chopping off a finger (the ancient Romans) and candle-flame-induced, bursting toe blisters (some Colonial Americans), plus good old fashioned head removal (comes in handy with zombies, too) and vein slicing.

And they all mention a waiting period after death, of at least three days, just to make sure.

As a result, there was no shortage of ideas on how to avoid ending up with a lot of earth over you before you really needed it, including coffins that gave a little extra help.  Buried Alive says at least 22 patents for “safety coffins” were applied for between 1868 and 1925.

Among the applicants was Franz Vester of Newark, who in 1868 took out a patent for what he called the “Vester Burial Case.” Want to know how it worked? Here’s the text as it appeared on the patent, including directions.

The Nature of this invention consists of placing on the lid of the coffin, and directly over the face of the body laid therein, a square tube, which extends from the coffin up through and over the surface of the grave, said tube containing a ladder and a cord, one end of said cord being place in the hand of the person laid in the coffin, and the other being attached to a bell on the top of the square tube, so that, should a person be interred ere life is extinct, he can, on recovery to consciousness, ascend from the grave and the coffin by the ladder; or, if not able to ascend by said ladder, ring the bell, thereby giving an alarm, and thus save himself from premature burial and death; and, if on inspection, life is extinct, the tube is withdrawn, the sliding door closed, and the tube used for a similar purpose. 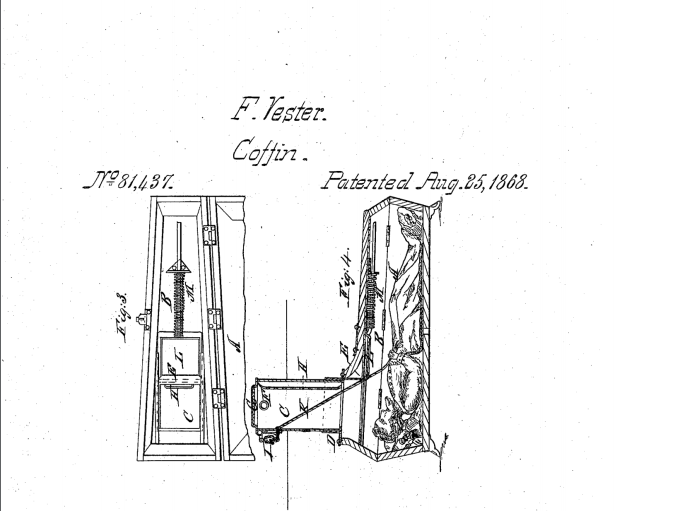 Patent schematic of inside view of Franz Vester’s safety coffin 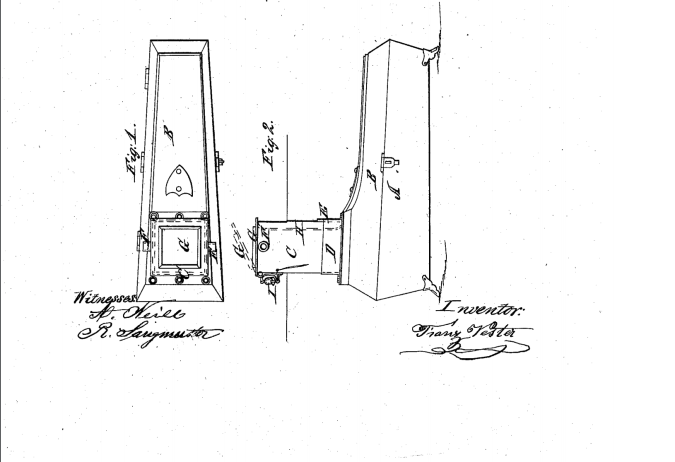 Patent schematic of outside view of Franz Vester’s safety coffin

A September 2, 1868 New York Times article further describes Mr. Vester’s coffin: it was a “little higher” than a typical coffin, “to allow of the free movement of the body” and “under the head is a receptacle for refreshments and restoratives.” The “chimney box” had a cover that locked from the inside where it could be manually sprung by the interred, or by a spring controlled by the same cord as the bell.

Mr. Vester gave at least two public demonstrations of his safety coffin, one of which was done on September 1, 1868 at Baire’s Brewery Garden on Springfield Avenue in Newark. According to the Times, it sounded like quite the party. About 600 people paid 50 cents each (about $8.00 in today’s money) for the privilege of seeing Mr. Vester test his invention.

Excavators dug the requisite six-foot deep hole and at about 3:00 PM, they lowered “a black coffin with silver trimmings” into it, along with supports for lowering it further into the ground. They then placed a rope around the hole, defining where people could stand and watch. The article noted that men, women and children were present and “every tree-top and elevated position was occupied by spectators.”

Mr. Vester, who the Times described as “a German gentleman, advanced in years,” came out and got into the coffin. People yelled “Good-by!” as the lid was put over him, and the coffin was lowered into the grave. Then, the “chimney box,” which had been draped with flower wreaths, was placed over the coffin. After that, it took gravediggers 15 minutes to cover everything with four feet of dirt.

As the burial was going on, a band “played a dirge,” and the spectators “made comments and drank lager, which was handed around by the several waiters.”

The original plan, the article said, was for Mr. Vester to stay underground for two hours, but because they were about an hour behind schedule and the crowd was getting impatient, it was agreed that he had proven his invention’s value after just an hour and 15 minutes. He came up  through the chimney “with no more perceptible exhaustion than would have been caused by walking two or three blocks under the hot sun.” The crowd applauded and “rushed to embrace and congratulate Mr. Vester upon the success of this most novel invention.”

Did anyone ever buy and use one of Mr. Vester’s safety coffins? That, we don’t know.