In 2011, I wrote a story about the talking dolls that Thomas Edison produced and sold briefly in the late 1800s.

One of Edison’s talking dolls, on display at the Thomas Edison National Historic Site. Photo by me.

The dolls had tiny record players in them, and they played wax discs onto which nursery rhymes had been recorded. The discs were very fragile and broke easily, which was one reason why the dolls weren’t on the market for very long. They came to be known as “Edison’s Little Monsters.”

One of the recordings that existed at the time I was doing my research was of “Little Jack Horner.” You can hear it here. 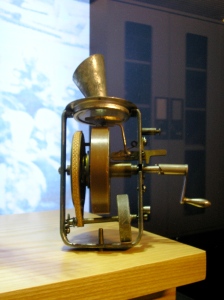 The tiny record player that was stashed in each doll. Photo by me.

The other day, the New York Times published a story with great news: thanks to technological advances, other recordings used with the dolls were captured. So there are now eight examples in total.

Just like with “Little Jack Horner,” the other recordings have a distant, ghostly quality that makes them somewhat creepy to hear. And from what I’ve seen on social media, I’m not the only one who feels that way. The voices, people reliably report, are the stuff of nightmares-something I know would horrify the young women who lent their voices to the recordings. But you can tell they didn’t use their normal speaking voices for the rhymes. They instead affected an overly dramatic style that reminds me of Dan Ackroyd’s Julia Child impersonation. So the combination of age and weird style can be disconcerting to the modern ear. 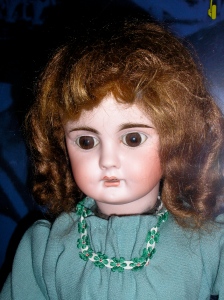 Close up of the doll at the National Park. There’s a little glare on the image from the case. Photo by me.

Adding to the creepy effect is the rumor that once Edison stopped production on the dolls, the parts were buried beneath a water tower on the factory property. I interviewed a park representative who said this wasn’t true, and I agree: I suspect that the parts were instead sold to another manufacturer who made plain old non-speaking dolls with them.

But it’s still fun to think of what could have happened to those parts. It inspired me to write a fictional short story about one possibility a few years back, which I’ve been meaning to shop around to different publishers but haven’t gotten around to for various reasons. This new development in the recordings gives me a little nudge to get going on that.