I was no more than two or two-and-a-half years old when I became very aware of the painting on my bedroom wall.

It was a portrait of a clown that my dad had painted in 1971, presumably with the intent of using it to decorate my bedroom, because don’t all kids like clowns? It hung there for maybe a year or so before I woke up one morning in my crib and really looked at it. The funny-looking man was staring at me, and I wasn’t okay with that. 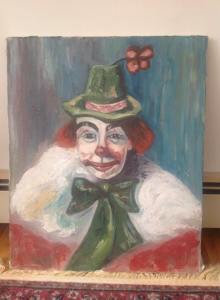 This clown scared the hell out of me when I was small.

I vaguely remember coming to this horrible realization, and busting out in tears. My mom and possibly my dad ran into the room to find out what the problem was. When they figured it out, the painting came down. From there I think it moved to the attic or the back of a closet and I don’t recall if I laid eyes on it for years after that.

It also moved into family lore, though, as the painting that scared the hell out of me. I mean, my dad had the best of intentions in painting it. How would he have known that I’d have that reaction? I guess it’s one of the joys of parenting.

Unfortunately, the painting made me afraid of clowns in general. I could keep my shit together in the vicinity of them, mostly, like at a circus. But interacting more than that was hard for me.

It didn’t help when, a few years later, I had another encounter with clowns that reinforced my fear. My family went to a picnic that was thrown by the Masons or a similar group that my grandfather was a member of. A few other members were dressed as clowns and one of them came up to me a little too enthusiastically. I crawled under my dad’s folding chair to get some space. Later on, another offered me a lollipop, which was even more confusing for me to deal with because not only was he a clown, he was a stranger and I’d been recently schooled on not taking any candy from them. Even if they were clowns.

So I continued to fear the clowns, and watching movies like Poltergeist or reading books like It didn’t help matters. These reinforced what I already felt, and I found that I was in good company.

Years later, I confessed my coulrophobia to a train buddy of mine. (Train buddy meaning someone that I met while commuting to my job in Newark. You tend to see the same people every day, especially when they get on and off at the same stop as you, and you start talking to each other and the next thing you know, you’re train buddies.) She listened to me speak of my fear of clowns and then confessed that on weekends she dressed up as one and did kid’s parties. Shocker! To her credit and mine, we maintained train buddy status, at least until I was laid off from the Newark job and no longer took the train to work. And it forced me to reassess my fear.

More time passed and I posted a story on Facebook about a creepy clown that was pictured standing on the side of roads somewhere in the Eastern U.S. I got lots of feedback from people professing to the same fear, even outright hating clowns. And I found out that another one of my Facebook friends, whom I don’t know very well, had been a clown and was NOT happy with people automatically assigning an evil quality to all clowns. Knowing what I know of her, she certainly isn’t like the ones I had encountered at that picnic decades before, and was rightfully frustrated.

I recently became interested in the fate of the painting. I thought it had gone to live with relatives but when I asked my one cousin, she couldn’t recall it. I asked my parents and they also weren’t sure where it was…but today they showed up for our weekly breakfast with the painting. Which is why you see the photograph here.

Memory alters over time. I could swear the painting had more purples in it than it really does. And it’s not as sinister as my kid self thought, though I’m not sure exactly what I’m going to do with it. But I guess the clown has come full circle back to me. If you wonder what the impetus of my own weirdness is, it’s probably this.