In July 2008, I had just finished assembling my second anthology of ghost stories, Weird Encounters. And despite my efforts to complete the book in time for the publisher to get it on shelves in time for Halloween that year, they were all for naught. Thanks to the financial crisis, the publisher said it might never be published, along with many other books that Weird NJ had diligently produced as part of its contract. Not the greatest tragedy of those days, I know, but I worked hard on that book and was disappointed it might never see the light of a remainder bin.

But I was trying to keep busy and ran across an article in the online edition of the Philadelphia Inquirer about one Lord Breaulove Swells Whimsy: a gentleman living in Mount Holly, NJ who lived the life of “an affected provincial.” No mere dandy, an affected provincial goes beyond superficial appearances to a deeper aesthetic and appreciation of all manner of worthy topics and pursuits. 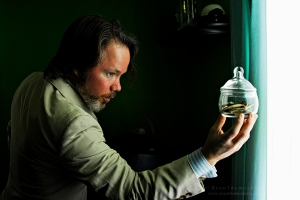 Lord Whimsy had published a book two years earlier called The Affected Provincial’s Companion that outlined this aesthetic, and while reading it and perusing lordwhimsy.com, I realized that he had the “weird eye.” A perfect candidate, I thought, for an interview in Weird NJ, and after clearing it with Mark and Mark, I set forth to make arrangements with Lord Whimsy, himself.

Which is how I found myself downing a large iced coffee at a Dunkin Donuts somewhere outside of Mount Holly at the end of July. It was where I arranged to meet up with Ryan Doan, who would be joining me at Lord Whimsy’s home to take photos while I took care of the wordy bits.

A short while later, we pulled up to Lord Whimsy’s immaculate little home, which he shares with his wife, Lady Pinkwater. Whimsy appeared out front when we arrived, dressed in a linen summer suit. I noticed that, true to affected provincial form, his tie was not quite the same shade of green of the handkerchief that poked rakishly out of his jacket pocket.

He and Lady Pinkwater brought us inside and we gathered around their kitchen table to make small talk and snack on a massively generous array of food, including homemade hummus. I was completely impressed by their generosity and kindness, and looking forward to producing an interview that would get Whimsy and his book into the minds of Weird NJ readers.

After snacks, we toured inside of the house, which was just as immaculate as the outside. Both Whimsy and Lady Pinkwater are designers and illustrators, and their home featured examples of their own art as well as other objects that fit in with their aesthetic, like terrariums. I particularly remember a plant hanging in their front window, a nepenthes, with its pitchers shooting off not-so-vague vibes of male sexual organs. But for science! And they raised moths, too, though at the time we were there no moths were in the works.

In the Whimsy back yard, he showed us his bog garden, complete with Venus flytraps. I leaned down at one point to get a closer look at the little carnivorous devils, which I’d never seen planted outside before, and pulled my hand back quickly when some of the moss that was also part of the bog started to push apart. I was roughing up the greenery!

The day was hot, and we were soon back inside to conduct “the interview.” And conduct I did, resulting in a transcript that would number 32 pages. Whimsy was as generous with his words as with his time and his hummus.

Remember that iced coffee that I had at Dunkin Donuts a few hours earlier? I sure did, starting with when we sat down to talk. While I was still focused on the interview, it was under increasing duress as my back teeth started to “float,” soon to be followed by my other teeth almost up to my incisors. The coffee had done its diuretic deed and by the time we wrapped up, I was almost in agony. Talking about piss troughs didn’t help matters. I had to ask Lady Pinkwater if I could use the Whimsy bathroom, which was probably poor reporter form. Call me Lady Makewater.

With much thanks to our hosts, and interview and photos in hand, Ryan and I went to work to put all of the info together. I had a lot of material, all of which I thought was fascinating, and it resulted in an interview of around 5,000 words. Long, yes, but I’d seen other stories and interviews in Weird NJ that were just as long. So I submitted the story.

The October 2008 issue of Weird NJ was the next one up, and I figured the interview would be included there. But something happened in the interim, and that something was Andy Kaufman.

Late that same summer, a group of people claiming to represent the comedian Andy Kaufman conducted a press conference wherein Andy would reveal to the world that his death was faked. The whole event was cloaked in mystery and subterfuge, and Mark and Mark had Chris Gethard cover it. Chris is a long-time fan of Andy and the perfect person for the job, and he brought his own humor to it. The story included “Andy” hiding in bathrooms, a puppet show, and in the very end, a car chase into Pennsylvania. Plus photos. It earned a six-page spread in the magazine.

My interesting but more sedate and cerebral interview with Lord Whimsy could not compete with this, unless I went back to Mt. Holly and challenged him to a highwheel bike race through the streets, some fisticuffs at the local old man bar, and maybe a puppet show involving the vaguely obscene pitcher plant.

Aside from the story’s length, Mark and Mark thought that maybe Whimsy was not as “weird” as they thought he was going to be. Even Whimsy said he was more of a “weirdo advocate,” but I still thought he was a great fit and I had failed to better capture the weirdness. For God’s sake, these people fed us homemade hummus, and I almost burst my bladder for the cause. But I froze, overwhelmed with trimming 5,000 words down to a more manageable size, and the story went into hibernation as I unprofessionally focused on other writing projects, which in turn I also failed miserably at. I was at a low point in my writing career and constantly aware of my hackitude, and more importantly, that my actions negatively impacted others.

In March 2011 I came out of my writing fog, just a tiny bit. I took a more honest look at the interview and began to trim it down, though at this point I had no idea what was going to happen to it. It had been so long since the actual interview had taken place, even though much of what we talked about wasn’t time sensitive. And about a year later, I did get a small bit about Lord Whimsy in a sidebar article I wrote to accompany a larger story on the Steampunk World’s Fair. The sidebar said that the full interview might appear on Weird NJ’s website, which Whimsy got wind of. He mentioned it in passing on his blog, citing his disappointment that the story hadn’t run, but more because he was curious about how it had turned out than anything else. He was still absolutely gracious after all that time, and I was thankful but also mortified.

Today, the interview stands at about 3,600 words. It might be even more relevant now that Lord Whimsy, whose real name is Allen Crawford, will have published a new book in May 2014: Whitman Illuminated: Song of Myself  (Tin House). In it, Crawford illustrates Walt Whitman’s poem, which appears in Whitman’s larger work, Leaves of Grass. While not born in New Jersey, Walt Whitman spent a good portion of his life in the Garden State and is buried in Camden, so anyone with an appreciation of lovely words and illustrations as well as a New Jersey connection should enjoy the new book. I am very much looking forward to receiving my Amazon-ordered copy; I can’t think of a better way to experience Whitman’s (and Crawford’s) work.

And as far as the interview goes, I’m going to ask one more time if Weird NJ wants to use it in the magazine or online. And if not, I’d like to publish it on this website, as infrequently visited as it is, if only so Lord Whimsy and Lady Pinkwater can see it and hopefully enjoy the results.

2 thoughts on “In which I am a whimsical failure, of sorts”